Learning How to Weave with Willow
Willow Weaving a Basket
GillHB

At the end of October I decided, before the year and decade came to a close, I wanted to do one more course - a willow weaving course. Again I wanted it to be relatively local to me in Surrey, supporting more local businesses rather than a London one, and I started to research various course. Most of them, because of the the time of the year, were offering to make stars or Christmas-type decorations which is totally understandable, but I wanted to learn how to make something more 'substantial' like a basket.  I found Nicki's courses in Westcott near Dorking and she was running a log basket course on the 2nd November and another on the 14th December.  I emailed to ask it there were any spaces on the 2nd November, there was one left, I emailed back to say I would confirm on the Monday if I was able to make it. I'll be honest - I'm a big rugby union fan, it was the world cup semi-final that weekend and if we won then the final was on Saturday 2nd November. I wasn't going to to miss it! However if we lost then I wasn't bothered about the final so could do the course. Any of you who follow rugby will know we won and made the final against South Africa - I'll say no more! I weighed up the date of the course in December being just two weekends before Christmas (lots to do!) but decided I was going to do the course. I booked. 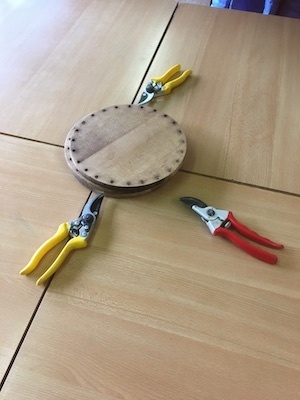 Having prepared my lunch, wrapped in one of my beeswax wraps of course, I headed for Westcott Village Hall, near Dorking. I had my route all planned but - surprise, surprise - a diversion that took me goodness knows where! Time to load up the satnav, but luckily I still arrived in plenty of time. There were three groups of four small tables grouped together set up with three bits of circular wood and secateurs on each group of tables. Nicki, together with her 'beautiful assistant' daughter Jazz, greeted me with a warm welcome and offer of coffee. I'm a bit of a coffee snob and only drink 'real' coffee rather than instant. Often on courses there is only instant, which I decline, so I was really happy when Jazz confirmed not only was it 'real' coffee but so was the decaff version! Yay!  And all laid out on a table was a delicious selection of homemade nibbles, including gluten-free, that you could help yourself to throughout the course and most of us did! Well you had to try everything, didn't you?

We spread out, three people to a set of tables, and took a circular wooden base and a set of secateurs. Nicki told us about the willow, where it was grown and when it was cut. One of the main areas for willow to be found is on the Somerset levels. Being Somerset born and bred I was very familiar with the scenes Nicki was describing about the coppicing of the trees. She continued to describe the many different ways in which the willow is treated and how that achieves the varying colours, for example: brown willow - has the bark left on and steamed;  In the buff or buff willow - the bark is stripped off before soaking; and white / cream willow - is cut, soaked, regrown and cut again before use. Nicki then passed us over to Jazz to show us the first step in making our basket and then we'd head back to our tables to have a go. 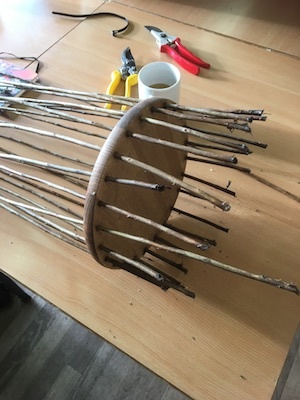 First we had to chose 24 willow canes, about five feet long, from a large bundle and then feed those through each of the holes in the wooden base. Sounds easy enough until you start wielding long canes around and realise that the other people working in close proximity are getting poked by your willow and you're getting poked by theirs! Time to pull the tables apart to have a lot more space and remove any mugs of coffee from the area!

Then came the start of the weave underneath the base of the basket to get the upright rods in place. Where to start?! Find the thinnest willow, bend it back around your fiingers and behind the next one, trim and repeat all around the base until you get to the last two reeds, then you do something different. (If only I could remember what it was!) Once completed, bash the base down on the table to secure all the reeds.

Now we were ready for the 'real' weaving to commence around the uprights. There's a whole number of different weaves you can do but we were starting with one called a three-wheel wale. Off we went to choose six more reeds from a slightly different pile and bring them back to our table. If you thought coping with some uprights to avoid your fellow pupils was a problem, wait until you start with three reeds each on opposite sides of your basket AND having to keep pulling your upright reeds perfectly straight as you weave! I was busy concentrating on the three reeds I was weaving, obviously turning the basket as I went, and wasn't aware of what the other three reeds were doing until I got poked in the arm by the reeds of the lady next to me. Tables pulled even further away!  Time for another coffee and nibble from the homemade treats table.

When you've done a few rows of weaving then comes the most satisfying part - 'rapping down'. You take your 'rapping iron', basically in our case a big thick piece of wood (you can just see mine in the corner of the photo), slightly thinner on the handle end, and bash down as hard as you can in between the upright reeds to push the reeds you've woven close together. I would absolutely recommend this as a form of 'anger / frustration release therapy'! Actually once I got into the weaving I found it to be really therapeutic, almost meditative, and when I didn't for one reason or another it was time to do some rapping. The plus side of working with willow is that it contains a compound very similar to aspirin so it seeps into your fingers and hands as you're working, apparently very good for anyone with stiff joints.

As we finished one weave we could choose to keep going with the same colour and weave or change both if we wanted. I thought that I might as well learn as much as I could and went for a multi-coloured, multi-woven basket. After the three-rod wale came the double French rand in a different colour, then back to the three-rod wale and this time two rounds of that followed by the single French rand and so on until lunch time. Out with my lunch wrapped in its beeswax wrap which several people asked about. I proudly told them I made the wraps myself - not that I was feeling at all smug! Jazz kept the teas and coffees coming, and Nicki had made soup for anyone who wanted some.

After lunch we were approaching the top of our baskets. They were meant to be log baskets, with a natural thick stick as a handle incorporated into the weave. We don't have a real fire at home so I wanted to dispense with the handle to use it as a waste basket, therefore needing to finish my basket off slightly differently to the others. We could chose to finish with a curved top or a straight top. Again wanting to learn as much as I could, I opted for weaving a curved top. Once all the weaving was complete then came the job of trimming off all the ends of the reeds to the right length. You then realise when you look inside the basket just how many reeds you have used and therefore how many ends you have to trim. I was pleased with my first attempt. It's not perfect as I can spot a few 'holes' but Clive seemed to love it when I got it home, and Jackson (my son) even more so when he realised it was staying in our lounge as a waste bin and not going to his flat. Will I be doing some more weaving in the future? Absolutely! And if you fancy having a go and live in the Dorking / Surrey area then I can highly recommend learning with Nicki (and Jazz) at WillowandYoga 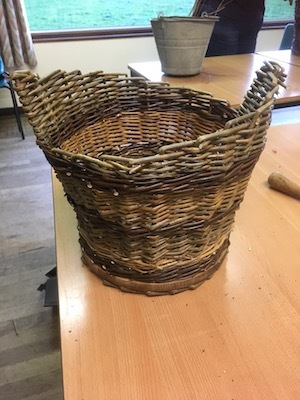